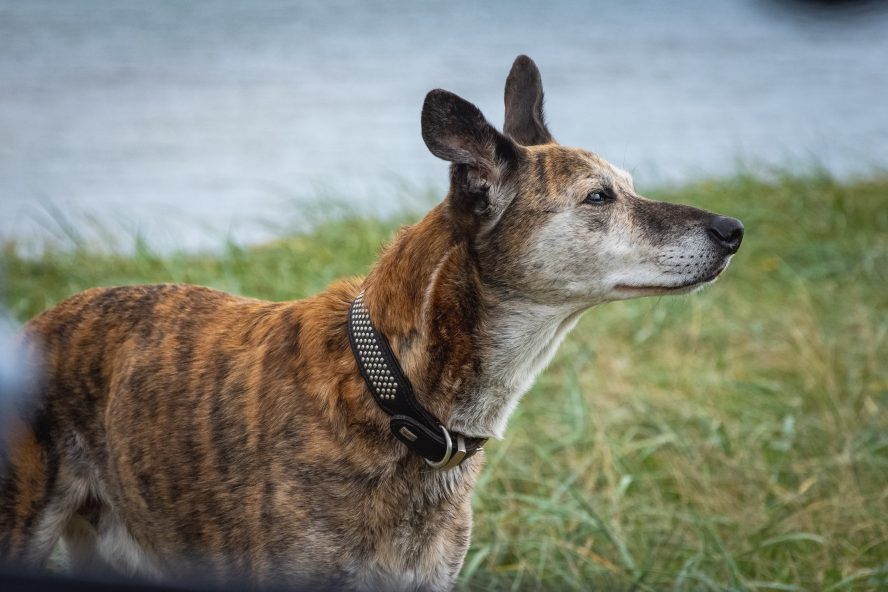 It was well into the national lockdown when Jean became concerned about Ernie, the lurcher. Ernie sometimes appeared to be walking oddly and occasionally would be very stiff when he got out of his bed. Jean felt that she should get Ernie checked out by her vet but was very worried about not being able to go into the surgery with him, due to the COVID-19 restrictions.

Ernie had been a stray. He had been roaming around the local village for several days. Concerned residents had posted on the local community Facebook page about him and Jean decided to see if she could catch him before something awful happened to him.

Ernie was very fearful of humans and was reluctant to approach Jean, despite being obviously very hungry and cold. He avoided all advances and was clearly nervous, but eventually as his strength diminished and hunger increased, Jean was able to win his confidence and catch him.

Jean rang the local dog wardens to inform them she had found Ernie in case he had been reported missing, but his previous owners couldn’t be traced as Ernie was not microchipped nor wearing a collar. After seven days, no-one had come forward for Ernie and so Jean arranged to adopt him and take him home.

First visit to the vets

Before taking Ernie home with her, Jean took him to her local veterinary surgery. Ernie was absolutely terrified, he cowered and trembled in the corner of the waiting room. Jean had to carry him into the consulting room to be examined. Ernie was very thin, even for a lurcher, but otherwise (as far as the vet could tell) in relatively good health. During the examination Ernie was so fearful he urinated on the table and clung to Jean whilst he was vaccinated but showed no signs of aggression whatsoever.

The next few weeks

Ernie soon settled in with Jean and her husband David. Initially, Ernie was very wary of David but as his confidence grew he became more relaxed in David’s presence as long as Jean was around. Ernie followed Jean everywhere. This was a clear sign of his dependency on Jean.

Jean was able to walk Ernie around the village. He was a bit of a celebrity having been the focus of concern of the residents when he was roaming. Slowly Ernie was able to meet strangers, as long as Jean was there to reassure him.

Unfortunately, when David tried to take Ernie out for a walk without Jean, Ernie became a quivering wreck and refused to leave the house. It was clear that Ernie could not cope unless he was with Jean.

Jean rang the vets and explained Ernie’s stiffness. Whilst the vet didn’t consider that his condition was an emergency it was clear that Ernie should be checked over. However, it would be unlikely that Ernie would be able to tolerate any form of examination without Jean.

Following a telephone consultation with the veterinary nurse who specialised in behaviour, a plan of action for Ernie was made. It was decided that unless Ernie’s stiffness became significantly worse there was no need for him to be seen at the surgery for a few weeks.

The veterinary nurse explained to Jean about over attachment in dogs. Dogs that have been relinquished to rescue organisations may, when they are re-homed, become overly dependent, just like Ernie. Jean had been reinforcing this, trying to right the wrongs she thought Ernie may have previously experienced.

Once Jean understood how Ernie’s over dependency had developed, she was ready to try and help him become more confident. However, reducing over attachment can be a lengthy process so, to help stabilise Ernie’s emotional state, the veterinary nurse suggested introducing Breakthrough dog food. Breakthrough is the complete, dry, dog food version of Val Strong’s serotonin enhancing diet.

Jean introduced Breakthrough over a few days (to avoid any stomach upsets associated with a change of diet) and began a series of exercises to reduce Ernie’s over dependency. Within a couple of weeks there was a significant improvement to Ernie’s emotional state. Ernie was more relaxed so more able to cope with the behavioural measures set in place and learn new coping strategies.

Ernie’s visit to the vets

Three weeks later Jean took Ernie to the vets. The vet had arranged to examine Ernie in the waiting room. Jean handed over Ernie’s carpet square to the veterinary nurse who placed it on the floor just inside the door. Although a little tentative, Ernie walked through the door and Jean handed over his lead and stood outside.

Inside Ernie was still anxious but remained calm enough to be examined and it transpired that he had a strained ligament in his hind leg. Once the vet had examined Ernie, the waiting room door was opened and the carpet square removed, Jean took hold of Ernie and gave him the biggest cuddle ever!!! What a result!

Thanks to Breakthrough, appropriate behaviour therapy and Jean’s dedication, Ernie was able to be treated successfully for his over attachment and is now fully fit and well. Ernie’s confidence continues to improve and he is still being fed Breakthrough dog food.