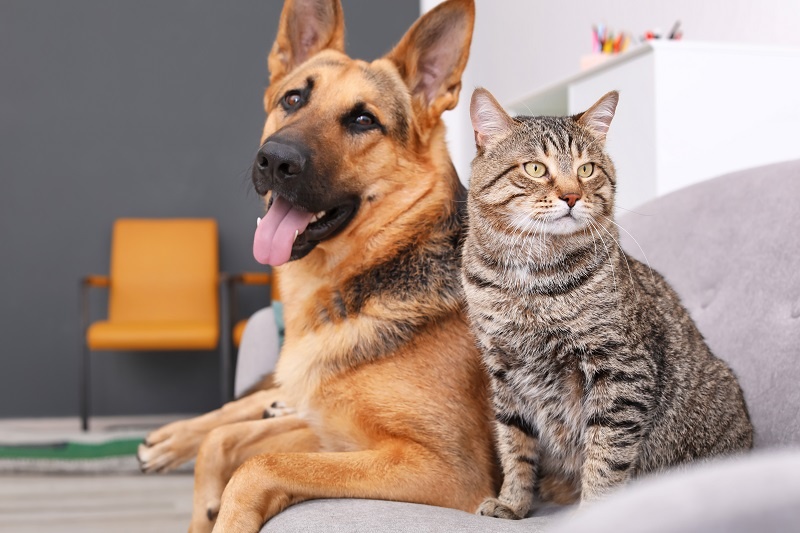 One of the most enduring aspects of social media, which is itself a shining example of the ephemeral, is the plethora of poignant images that have so effortlessly been transported into all of our homes and hearts. One of these is the classic Hollywood photograph of Joan Collins and her pink poodle and another is the grainy black and white photograph of Sir Winston Churchill with his poodle, Rufus, but few of us can ever resist pictures of any dogs or cats, especially when it comes to puppies and kittens.

However, it is pretty common for people to self-declare their preference for either dogs or cats and, equally, for us to draw some immediate conclusions about what that might say about their preferences. How many times have you heard that cat owners are more intelligent, aloof and successful, or that dog owners are more down to earth, friendly and sociable? Perhaps more important is to ask ourselves if there’s any truth in these assumptions and, as dog owners, are we really different from cat owners? Based on these stereotypes, I might quite fancy my personality to be all things feline but, deep down, I know that I’m really a dog person through and through.

There are some extraneous influences here; a study conducted a decade ago by International Cat Care showed that cat owners were predominantly female and aged 35—55, but as societal pressures increase, with many young people sharing housing and city work practices, together with commuting pressures requiring people to be away from home for twelve hours a day, and with young families less able to arrange mortgages until later in life, cat ownership is clearly easier and more responsible than keeping a dog in such circumstances.

We have long known that our attitudes to cat and dog ownership differ widely: with society preferring images of fat, sedentary cats (which we associate with comfort and homeliness) to images of fat, sedentary dogs (which we associate with irresponsible ownership) and with some stereotypical assumptions such as old ladies owning a cat for company in their later years. The truth is, of course, that unless we have a working dog, all pet ownership is for company and our attitudes towards sharing our homes with a cat or dog, or both, are fascinating.

In an online study by Gosling, Sandy & Potter, from the University of Texas in Austin, the researchers took the views of more than 4,500 people to see whether our stereotypical associations with dog and cat ownership were actually based on any science. A typical ‘dog person’ has often been described as being loyal, kind, helpful and faithful while a typical ‘cat person’ has been described as being independent, mysterious, intelligent and thoughtful. A trip down through history might have borne that out if we look at famous dog owners  (John F Kennedy, Winston Churchill, Joan Collins and Queen Victoria) compared to famous cat owners (the French poet Charles Baudelaire, the Bronte sisters, Catherine the Great, Pablo Picasso and Florence Nightingale), but then some of these owned both cats and dogs – so can we find any science at all behind our somewhat emotional categorization of people?

The first finding of the study was that preference for either a cat or dog didn’t specifically indicate that the subject actually owned either species as, for many people, pet ownership may not be possible. One explanation for individual preferences could be that the behavioural characteristics of either cats or dogs are sometimes mirrored by their owners. Just as we like to find physical similarities between certain pets and their owners, perhaps an aloof, mysterious person might simply prefer an aloof, mysterious pet, like a cat, while the warm, affectionate, social nature of dogs may well appeal more to people who have similar behavioural qualities themselves. We know that dogs require more care and attention than cats and this may appeal to those who are happy to invest their time and effort in the animal rather than those who may prefer a pet with lower maintenance needs.

In the study, the results showed that dog people scored more highly on qualities like extraversion, conscientiousness and agreeableness while cat people scored more highly on neuroticism and openness. There were similarities in the dog group to those who liked both species and to those who liked neither species, which suggests that ‘dog people’ may be far more similar to the wider group of ‘all people’ while ‘cat people’ may be a more distinctive subset of the population.

In the discussion within the published article, and among psychologists who have subsequently commented on it, one thesis put forward is that ‘dog people’ may actually be happier, in general terms, than ‘cat people’. The qualities that have been ascribed to dogs are largely those which represent contentment and happiness in our wider societal group, but it is the finding of ‘openness to experience’ (where cat people scored most highly) that may hold the key to the findings. Psychologists have been discussing whether people who may be more closed to experience tend to look at others who differ from them as being out of touch with reality and somehow different. In contrast, those who are most open to experience tend to look down on those who are more closed as being less intelligent and less cultured and psychologists have suggested that, if ‘cat people’ prize openness to experience as part of their individuality it may suit them better to see themselves as being different. Not surprisingly, there is wide disagreement between psychologists over this suggestion!

Dr Scott McGreal makes the point that “Differences between personality traits between cat and dog people tend to be modest in size and there is considerable overlap between the two groups. Other factors besides personality would appear to play a role in whether a person develops into a cat or a dog person.”

Clearly the jury remains out on this subject, but, hopefully, further studies will help us develop a better understanding of the way we all think and act when it comes to owning pets.