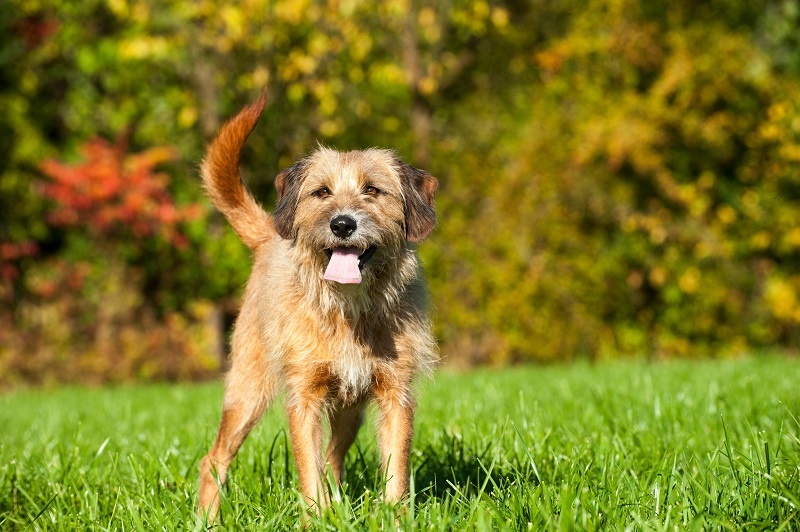 As humans, we have fairly fixed stereotypical ideas about things like thinking a fat cat is a contented cat and that dogs wag their tails to communicate happiness. As in most things in life, each is partially true but neither tells the whole story.

In the case of dogs wagging their tails there is far, far more to this than one might see at first glance.

Dogs use their tails as a means of communication and as a tool to assist with balance. It stops the dog from tipping over when making a sharp turn when running and it acts as a rudder when swimming so the tail is pretty important to a dog and, whether the dog has a long, fine plume of feathery hair or just a short stump the tail provides a mechanism for language and signaling between dogs. As the relationship between dog and man has evolved over the millennia, that signaling is now also used to communicate between the dog and the humans around it. Scientists have noted that solitary dogs don’t wag their tails as much as there is little point in signaling.

Tail wagging evolved among the pet dogs’ ancestors as a means of communication that could be observed by other dogs at a distance. The tail evolved, over time, to become bushier, often with a paler colouration of fur on the underside or a differential colouring of the tip of the tail so that this flag waving could be more easily spotted by the pack. (1) This long distance signaling ability also had real benefits at close range where the wagging of the tail created a flow of air which wafted the natural pheromones from the dog’s anal sacs which, in turn, helped distribute important information to other dogs. When two dogs sniff around each other’s tails, it is this pheromone messaging that they are seeking.

Some dogs wag their tails more than others and tail wagging varies between individual dogs and by breed; some are more restrained while others, like my Labradors seem to wag most of their body and revolve their tails like a propeller.

Of course it would take observation over a period of time to be sure, but some dogs may barely wag their tails very much at all and yet it would be a mistake to mistake their reserve for unhappiness.

In a relaxed and friendly dog, we can usually interpret enthusiastic tail wagging as being similar to a human’s smiling greeting but it’s also important to know that the converse may be true as a wag of the tail may not be signaling a happy greeting. A wagging tail doesn’t always mean happiness; tail wagging can also signal a complex range of emotions such as uncertainty, suspicion, dominance, aggression or submission so it is important to look for all the other signals of canine body language such tail position, facial expression and stance to get a better idea of how the dog is feeling at that moment and, most importantly, the message that the dog is trying to convey.

If the tail is in the neutral position, the dog is relaxed, if the tail is held straight out behind the dog, this usually signals curiosity and interest but a slow sweeping tail movement may indicate that the dog is unsure of what message you may be sending and can suggest anxiety or confusion.

A tail held higher than usual suggests that the dog has been aroused by something and when the tail is held vertically this can signal dominance and/or aggression. Again, the actions of the tail should be read in conjunction with other aspects of body language and a vertically held tail , which may be tense with occasional twitching, together with a confident body position, legs spread, ears forward, raised hackles and maybe growling, bared teeth, staring or barking should always tell you that the dog needs to be treated with caution and respect.

As a rule of thumb, in an alert and engaged dog, the ‘normal’ position for the dog’s tail will be horizontal. When the tail rises above the horizontal, this indicates a scale of arousal which ranges from excitement through to aggression at the extreme end of the scale. When it dips below the horizontal, that suggests a scale of reaction that extends from mild anxiety to frank fearfulness. However, as mentioned above, these reactions vary between individuals and between breeds.

Scientists have recently discovered that the direction in which a dog’s tail revolves may also have meaning. Interestingly, researchers found in 2013 that dogs understand and respond to the asymmetric tail wagging of other dogs. The asymmetric signalling of a right-wagging tail relaxes other canines, while a left-wagging tail makes them stressed. (2)

Finally, as owners, we soon come to recognize the signals that our dogs are trying to convey to us and so should always be able to take note of the condition of the tail itself. It can easily be injured and any wound may be difficult to heal as a result of this highly important wagging activity. Any damage that doesn’t heal quickly should always be referred to the veterinary surgeon.