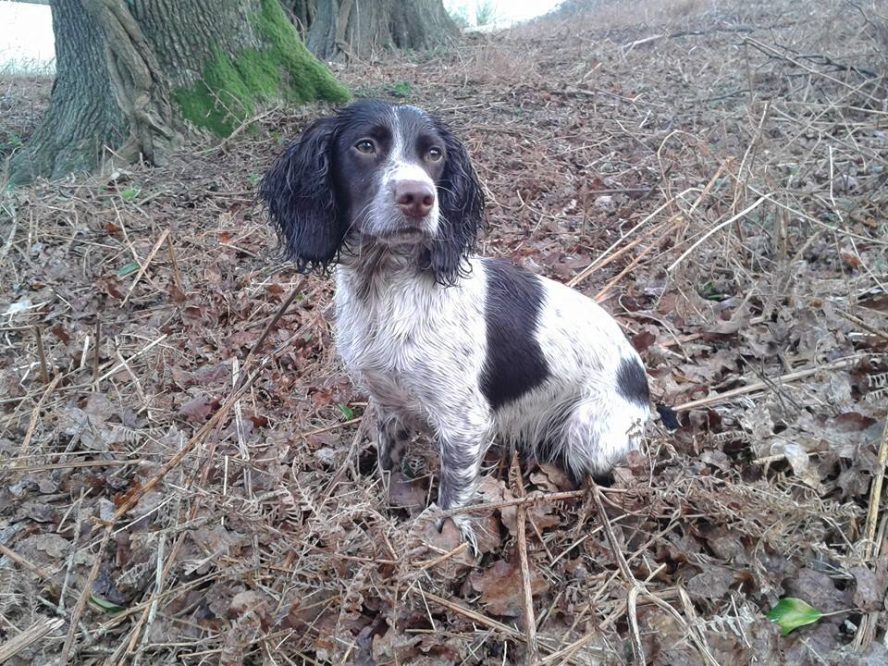 The beginning of canine meningitis with Secret the Springer Spaniel

Secret is a working-type English Springer Spaniel. I am a vet and a behaviourist, and I bred Secret myself.

She was reared in the home, properly socialised with my own dogs and other dogs, and flew through her Kennel Club Good Citizen Dog training and awards. Unfortunately, at 6 months old, Secret became extremely ill with meningitis. She was hospitalised at two different veterinary hospitals before a diagnosis was reached.

Her treatment consisted of large doses of steroids, and thankfully she recovered. At around 18 months old, Secret started to show anxiety around unfamiliar dogs: particularly if she was on the lead and if they were noisy and came into her personal space. Secret remained happy with her own family of dogs and with other familiar, calm dogs.

The health impact of meningitis in dogs

Behavioural changes have been described in dogs that have survived meningitis, and this may be linked to damage caused in the inflamed brain or to the steroid treatment required to control the inflammation. Corticosteroid use, over a long period at high levels, can impact the hypothalamic-pituitary-adrenal axis in a similar way to chronic stress, leaving dogs (or people) with anxiety. It is also possible that Secret’s growing aversion to unfamiliar dogs was linked to her veterinary hospital stays. Despite receiving excellent care, the hospital kennel environment was sometimes noisy and busy.

I was concerned that Secret felt uncomfortable on our walks, which are sometimes in busy dog areas to fit in around work. On top of this, a behaviourist with a lunging, snapping dog is not a good advertisement so I started to work on Secret’s anxieties.

The first step of her programme was a change in diet. Secret had been fed a home-made raw diet with a complete kibble twice a week. This was changed (over a week to avoid stomach upsets) to Breakthrough. Breakthrough is the complete, dry, dog food version of Val Strong’s serotonin enhancing diet. Progress Training Treats were used when required. Secret also wore a pheromone collar for the first four weeks.

Secret stopped going on walks with my other dogs so I could concentrate fully on her. At home I reminded Secret of the cues ‘watch’ and ‘let’s go’.
‘Watch’ – this is a cue to give me eye contact. It can be captured in young puppies using a clicker to mark split-second eye contact. As the behaviour is learned the cue can be added and a longer duration of ‘watch’ asked for before rewarding.

‘Let’s go’ – this cue means we are changing direction. I start with the dog sat by my side and then I take a step back. If the dog doesn’t automatically move to a position in front of me, I might use our recall cue ‘come’. Once the dog is moving in front as I step back, I spin on my heel and change direction, so I get a smart turn with no pulling on the lead before rewarding with a treat.

Once Secret had been reminded of these at home, I started using them on walks. To start with it was important that there were no dogs around when I practised these cues. Once Secret got the hang of randomly stopping to gaze up at me or our changes of direction, I was able to use these cues as other dogs approached. If I could change direction, we would do a ‘let’s go’, and if I couldn’t, we would do a ‘watch’ with my body blocking the dog from interfering with her. Both ‘let’s go’ and ‘watch’ were rewarded with dried meat treats. The key to using these cues successfully with a reactive dog is to use them to protect the dog when she has noticed a potential threat, but before she feels the need to react.

I remain careful with Secret around unknown dogs, especially in situations where she can’t escape, and I am always ready to use ‘watch’ and ‘let’s go’ to protect her from boisterous dogs. Secret’s attitude to passing dogs on walks is now quite different; instead of being ready to snap and lunge she walks close to my leg and nudges my hand for a treat once we have walked past.

Secret stayed on Breakthrough for around 6 months. As well as being good for her mental health, the food kept her well-muscled and with a great coat. During this time Secret’s behaviour improved significantly, demonstrating that Breakthrough can be used successfully in conjunction with other behavioural therapies and products with great success.