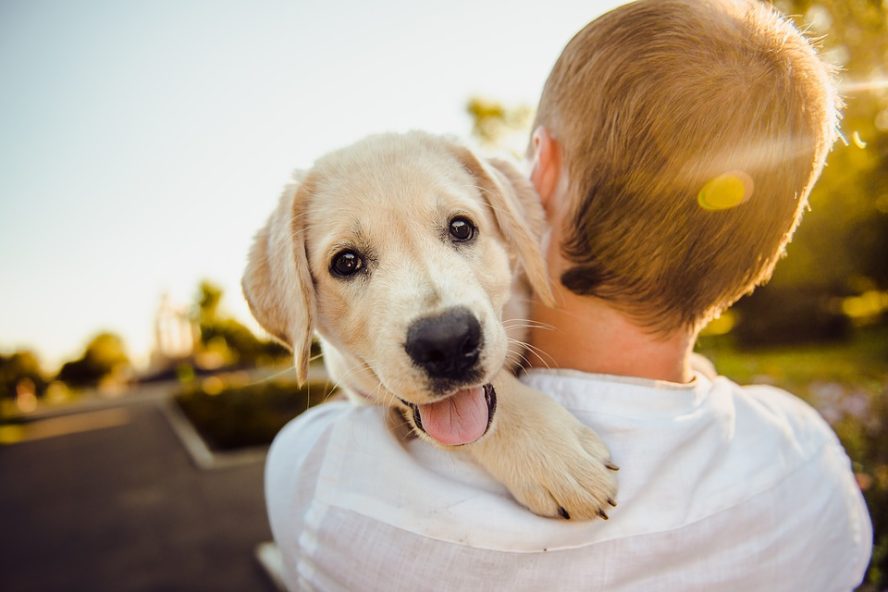 When does adolescence start in dogs?

Neutering dogs is a topic filled with debate. Adolescence describes the period in a dog’s life when hormonal changes drive behaviour changes and changing hormones result in sexual maturity (puberty). Dogs reach puberty at different ages. Small breeds tend to become sexually mature earlier than large breeds. Expect to see hormone related changes from 6 months of age in toy and small breeds. This could be later (between 9 and 18months of age) in large and giant breeds.

What behavioural changes will I see in my adolescent male dog?

There is often a breakdown in recall training at this stage as the dog becomes more aware of his surroundings and more confident in being away from his owners. Well socialised dogs that have interacted well with other dogs can start to show posturing behaviour such as stiff body language, raised hackles and tail, and placing their neck over another dog. If the other dog does not have the skills to diffuse the tension, scuffles can break out.

Adolescent males may start to mount and ‘hump’ other dogs, which again can lead to fighting.

What behavioural changes will I see in my adolescent female dog?

Coming into ‘season’ refers to the short period, once or twice a year (every 7 months on average), when a female dog is sexually available. Most owners do not notice anything unusual as a bitch approaches her first season, but she may become more clingy, more aloof, or struggle with new training exercises. Some bitches will stop to do small ‘marking’ wees on their walks and behaviour around other dogs may become more friendly and playful, or less tolerant.

During her season, a bitch may seek out entire male dogs and may become aggressive with other female dogs. Exercise bitches in season on the lead and in places where they won’t meet off lead dogs. The season lasts for up to 28 days with days 10-16 usually the most fertile.

Testosterone drives urine marking, seeking out female dogs, and competitive behaviour which are all are masculine attributes. The hormone gives confidence, but the levels fluctuate wildly in adolescent dogs. This means that a young male’s behaviour can vary from extremely nervous to overly confident and back over a few days.

Adolescent males can be tricky to handle as they may be easily distracted and lose some of their basic training. They are at risk of getting into fights by giving off mixed messages to other dogs. This is because they lack the social skills to finish what they start.

As in male dogs, a rise in GnRH stimulates the anterior pituitary to produce FSH and LH. FSH and LH stimulate development of the egg cells in the ovary and rising oestrogen levels. LH surges just before ovulation and progesterone rises steadily.

Changing oestrogen and progesterone levels cause external signs of a blood tinged vaginal discharge and swelling of the vulva. Oestrus behaviours such as seeking out other dogs, playful flirting, mounting, and then standing with the tail to one side for mating are also controlled by hormones.

Bitches are unusual in that progesterone levels are maintained by the ovaries whether the bitch is mated or not. When a bitch gives birth (or at the end of her non-pregnant cycle) progesterone levels drop, triggering the pituitary to release prolactin for milk production. False pregnancy in an unmated bitch can sometimes lead to distressing behaviour changes.

Neutering a male dog is referred to as castration or orchiectomy. It involves the removal of both testicles. Testosterone levels drop to a negligible level over a month. The dog becomes infertile within a few weeks of the operation.

Neutering can reduce confidence further in fearful dogs and can lead to a worsening of fear related aggression. Assessing the male dog’s ‘aggressive’ behaviour needs to be done carefully to decide which are showing testosterone driven competitive aggression (where neutering may help) and which are showing fear related aggression. Neutering will not ‘calm’ a dog down and should always be considered in conjunction with a training or behaviour programme.

An implant is available which mimics GnRH, but which binds more firmly to receptors in the pituitary. This causes an initial rise in FSH, LH, and testosterone followed by a long-lasting decrease. The initial rise can worsen aggression in some dogs but is followed by 6-12 months of infertility and low testosterone. This implant gives behaviour changes most like castration.

Vasectomy is an uncommon procedure in pet dogs which causes infertility but does not affect testosterone levels or unwanted male behaviours.

A shorter acting injection can also lower testosterone levels, reduce fertility, and alter behaviour in male dogs. However, because this drug is similar to progesterone, it may have a feminising effect: making dogs less aggressive than neutering will.

Neutering and alternatives to neutering in female dogs

Neutering a female dog is known as spaying or ovariohysterectomy. It involves removing both the ovaries and uterus. Some vets perform an ovariectomy – removing just the ovaries. In both cases hormone levels drop and behaviour is usually the same as it was between cycles.

A very small number of bitches can become aggressive following neutering. It is thought that this happens where bitches have been influenced by testosterone from their brothers in the womb. Consequently, removing the female hormones makes them act more like males. Oestrogen tablets may help these bitches.

Some authors recommend leaving the ovaries but removing the womb to prevent unwanted litters without removing the female hormones. Unfortuantely, this carries the surgical risk of neutering with no behavioural benefits and is not a route to be recommended. It also carries the continued risk of stump pyometra.

Using the long-acting hormone implant is not licenced in bitches. However, it would stop cycling for 6-12 months after initially triggering a season.

Preventing seasons with various progesterone-like medications requires discussion with your vet because all carry risks.