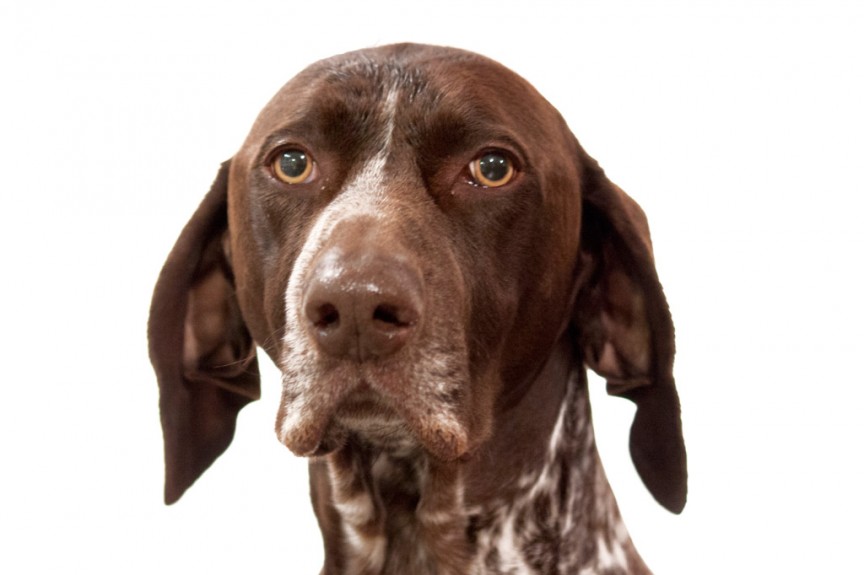 When a dog is jumping from a ﬁrst-ﬂoor bedroom window to escape loud noises, urgent action is needed – and fast. CAPBT behaviourist Vicki Harrington was asked to help…
Jemma is an eight-year old German Shorthaired Pointer. When she first arrived from rescue three years ago, she cowered, urinated or defecated when approached. Her new owner, Jean Harris of Brackley, Northamptonshire, gradually gained Jemma’s trust and her confidence improved. The only problem Jemma continued to have was a phobia of loud noises, especially fireworks and thunder. During these noise events, Jemma would hide in the bedroom if alone, or would pester Jean to accompany her upstairs, where she would hide under the duvet. Two years ago, this escalated to Jemma attempting and succeeding to escape, when her owner was out, by opening the bedroom window and jumping out. At this time, Jemma was allowed the run of the house, together with Jean’s other dog, while she was out, but after a couple of first-floor window escapes, Jean restricted them to the kitchen. Remarkably, Jemma had so far got away with only cuts and bruises to her chest and legs. Referred to me by her vet when her escape attempts became more frequent, Jemma had started to chew the door and window frames. This coincided with a number of recent thunderstorms. Jemma’s escape attempts also become more frequent if left alone during the firework season. On one occasion, she escaped by ripping out the cat flap, creating a larger hole, and finishing by chewing through the back gate to freedom.

Phobias do not improve unaided. If no action is taken to alleviate them, they will increase in intensity and severity over timeVicki Harrington

During my visit, both dogs were extremely friendly, and Jemma, especially, demanded attention. When she settled, it was next to her owner, with her head resting on her feet, as usual. When Jean was moving around the kitchen, Jemma was constantly alert to the movements. These observations confirmed Jemma’s reliance on her owner to cope with loud noises or stressful situations.

Moreoever, Jemma never bolted when out – the more common behaviour in dogs. On hearing a loud noise when on a walk, Jemma would run back to her owner and stick to her like glue.

SEEKING RELIEF
Phobias do not improve unaided. If no action is taken to alleviate them, they will increase in intensity and severity over time, or gain full force, immediately, as panic, should a particularly bad exposure be experienced. In Jemma’s case, what started as an escape to her owner’s bedroom for relief soon became inadequate and she started trying harder to get to her owner for comfort and not just to escape the noise or associated location. She had constantly had her escape strategy reinforced by the eventual reunion with her owner, followed by the noises stopping. This resulted in a huge feeling of relief and, in her mind, her strategy worked, so the same behaviour was adopted again and again. Relief is a very pleasurable feeling and, therefore, a powerful reinforcer. I suspected, due to the owner’s account and my observations, that Jemma would be fairly alert when in the house without Jean and would look for her. This was confirmed by some video footage. As she would already be alert before the fireworks or thunderstorm started, her reaction to them would be more severe than if she had been settled at home with the owner. My suggested treatment plan took into account Jemma’s temperament, sensitivity to noise and touch, current coping behaviours and the severity of the phobia.

TREATMENT OPTIONS
Due to her current severe reaction, I advised Jean to consult her vet about the possible medical options to help calm Jemma during these noise events – enough so that she could learn new coping strategies. New learning is very difficult, if not impossible, when scared. There are a number of prescription medications, supplements, pheromone products, herbal remedies and calming shirts that have been shown to help phobias and reduce stress. But what may work for one dog may not necessarily help another. Providing a dog is healthy and the vet agrees, taking the prescription medication route may be more reliable in some cases. For Jemma, I believe she needed something to help calm her enough to allow her to concentrate on learning new behaviours.

With noise phobias in particular, it is important to let the animal hide if it feels the need to do so. Jemma already had a hiding strategy. I recommended that a permanent den area be set up to provide a safe, pleasant area for her to hide. It was to have her bed in, water bowl and chew toys, and all her meals were to be fed there. In addition, I suggested placing a blanket, piece of clothing or preferably a duvet Jean had slept in for at least a week, so Jemma had something with her owner’s scent on, and her own duvet to hide under to help her feel more at ease.

I advised that the den area should have sides and a roof (a dog crate is ideal), be against an internal wall, covered in heavy blankets or duvets to help insulate it from noise. As Jemma often settles and sleeps with her doggie housemate, I suggested a den big enough for both dogs.

As Jemma’s diet was varied, I recommended a change to a complete, senior, hypoallergenic food

Providing Jemma with foodstuffed chew toys or puzzle toys when left alone would give her something to chew or do as another coping strategy. Chewing is very rewarding and a common way dogs cope in times of stress. Stuffing the chews with food would hopefully make them more appealing than a door or window frame.

Stuffed toys could also prove to be a helpful tool for Jean to use once Jemma’s chosen medical calming option had started to work. Jean would be able to present Jemma with a particularly treat-laden stuffed toy, with all her favourite foods in, when a firework display or thunderstorm started. This would give her a different coping strategy, and, over time, could help her to associate noises with good things happening and, in turn, associate positive feelings with loud noises rather than fear or anxiety.

As Jemma’s diet was varied, I recommended a change to a complete, senior, hypoallergenic food, as an adult or puppy food contain too much energy for Jemma’s lifestyle and could aggravate her hyper-vigilance when alone. I also suggested feeding small, frequent meals to maintain a more level release of energy throughout the day. Using the chew toys to dispense this food would be ideal for Jemma’s situation as well as increasing mental stimulation, which can help energy, boredom and stress levels.

Finally, I advised Jean not to over-reassure Jemma when she is scared, as this would just reinforce her feelings of fear and stress as well as showing Jemma that there is something to be scared of.

I was satisfied that Jemma was exercised enough for her breed type, so the only advice I suggested was to ensure a long walk before dusk during firework season and just before the owner left the house, and to avoid walking in areas and at times when the noises she is sensitive to are likely to occur.

These measures, alongside the obvious increase in house security to prevent Jemma being able to jump out of a first-floor window, would enable Jemma to get to a point where Jean could start introducing pleasant and rewarding activities during noise events as an alternative way of coping. Depending on how well an animal responds to this desensitisation process, there is always the potential to start regarding loud noises with more positive and pleasant emotions and, in some cases, find them fun! Sadly, due to the length of time Jemma had suffered, along with the severity of her response, I felt that this outcome would have been unlikely.

OUTCOME
The sooner you start to tackle a dog’s fear of loud noises, the better the eventual outcome. Even if the problem is not dealt with soon enough, we can certainly take steps to ensure the dog’s reaction does not get worse and that these dogs are provided with better and safer ways to cope when scared.

Unfortunately, Jean chose not to follow the advice with regards to the den area, medication and desensitisation programme. Resistance to prescriptive medication is not unusual and it is always a challenge to consider medication as necessary. However, the welfare of the dog has to be paramount. CAPBT members’ experience and veterinary behavioural advice support its use in such cases. Our practice saw Jemma a couple of times over the next few years, for luckily minor injuries, as a result of her escapes.

About the author: Vicki Harrington RVN DipCABT (Coape) NOCN, began her career with animals in 1991 as a trainee veterinary nurse, Vicky went on to qualify in 1995. She has worked for Hook Norton Veterinary Group in Oxfordshire for 15 years, and has been the head nurse for the last seven years. Vicky began her studies in companion animal behaviour in 2001, completing the BVNA Companion Animal Behaviour Certificate. She completed her Coape Diploma in 2004 and has been dealing with dog and cat behavioural cases in the veterinary practice since then. She is an affiliate member of the Coape Association of Pet Behaviourists and Trainers. Hook Horton Veterinary Group, White Hill, Sibford Rd, Hook Horton, Banbury, Oxon, OX15 5DG. Tel: 01608 730501, Email: v.harringtonhook nortonvets@gmail.com