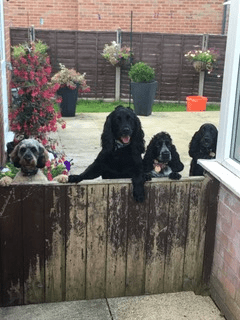 Meet Millie; a Blue Roan Show Cocker. I rehomed Millie in February 2016 when she was six months old, through a dog trainer I know. The dog trainer had been called in to help Millie’s original owners, but after the dog trainer’s third visit to their house they had had enough and wanted to rehome her. Millie was with me and my two other spaniel crosses for a month before she started showing her true colours. Over night, she started to be grumpy and aggressive towards me and my other dogs. At first, I thought she was having her first season and visited the vets. They recommended a behaviourist! I decided to have her spayed, hoping this would help her, but it didn’t change anything. Once my male dogs stayed out of her way and she was top dog, the arguments between them stopped and things settled slightly at home.

I nearly rehomed her myself, many times, but I absolutely adored her and knew if she fell into the wrong hands she would end up being rehomed again and again and have a miserable life. There were lots of tears from me.

I took her dog training once a week and she loved the mental stimulation. Once she got to know the other dogs she was okay, as long as they didn’t come near her. She hated other dogs she didn’t know, and would bark and be really angry towards them. She used to really embarrass me. Every walk we had, had to be planned to avoid running into another dog. 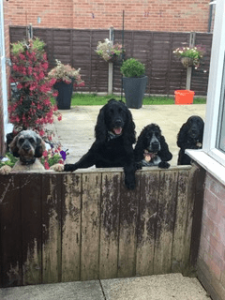 After 14 months, our dog trainer recommended trying Breakthrough. I had never heard of it before. I looked into it before going ahead and ordering my first bag (which we are still on). Oh my goodness! We now have the sweetest, most loving dog that wants cuddles. She is much more accepting of other dogs and is now quite happy with my aunt’s dog, Pebbles (Millie hated her and couldn’t be in the same house before). She is happy-go-lucky, with a wagging tail and wants to play with my other two. After two or three weeks of being on the food we went away with the dogs and, for the first time, Millie lay down next to Stanley for a sleep. We have turned a massive corner. She is much calmer and not on-edge all of the time.

I am not very good at putting it into words, but basically I have a very loving and confident dog that will have a very enjoyable life thanks to Breakthrough.