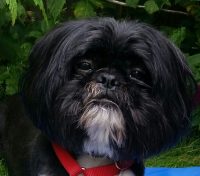 Peep a Shih-tzu arrived at the rescue centre from a family with two young children and an aged Boxer who was suffering with cancer. His owners felt they didn’t have the time to spend with him and caring for their elderly ill dog was their priority. Peep hadn’t really been walked much or socialised, and was really quite wary of being handled. He had sore eyes and the centre found he was really quite scared of anything unfamiliar.

Once in his new home with Sally even though he was now living a busy active life, enriched with training and exercise she soon noticed he suffered from anxiety 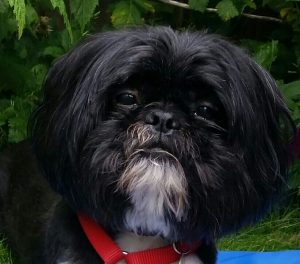 related behaviours such as feet licking, when he was disturbed by any loud noises. He was referred onto the breakthrough™ diet to try and help relieve his anxieties. Sally was more than keen to try the breakthrough™ diet especially with firework season around the corner. Fireworks have always been a huge problem for Peep, Sally had tried a couple of remedies, wraps and a desensitisation CD and although they did appear initially to take the edge off his behaviour, it really very clear that he was still extremely anxious. He would always try to hide when he heard fireworks, under the sofas and in the bookcase were common places to go. This has been so terribly distressing both for Peep and Sally.

Peep started the on the breakthrough™ diet and after only about a month Sally noticed that Peeps licking behaviour had pretty much diminished and where previously Peep would always want to be sitting as close as possible to Sally on the sofa, he is now quite content in a dog bed or on the other end of the sofa.

The first fireworks Peep heard this year albeit it in the distance but Peep had no reaction at all! This was the very first time he hadn’t reacted in all the time Sally had known him. The following weekend and bonfire night Peep heard a huge amount of fireworks and although he was distressed, hyper vigilant and panting, the hiding behaviour had not re-surfaced; he also was able to manage to eat which previously he wouldn’t. He enjoyed distractions like puzzle toy and enrichment boxes with his breakthrough biscuits hidden amongst the toys, which again normally under such stress he would simply turn down anything offered. Earlier on November the 5th itself Sally and Peep took their walk early so as to try and avoid the fireworks but the fireworks did start whilst out and although they made him jump he didn’t try to bolt. Such a huge improvement in such a short time, Sally is really hoping after seeing these improvements that by next year Bonfire night will no longer be an issue.